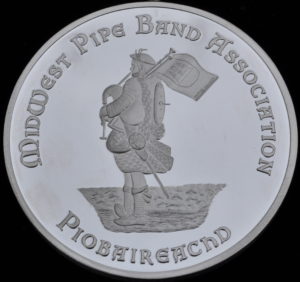 The McCallum Bagpipes & MWPBA Silver Medal (USA), 2.5 inches (6.5 cm) in diameter featuring the ancient MacCrimmon piper and “MidWest Pipe Band Association” on the obverse, and the McCallum logo on the reverse, will be awarded to the day’s champion in Piobaireachd. Prize moneys include 1st – $750; 2nd – $500; 3rd – $250. The Silver Medal Champion will also be awarded a stand of Macrae Bagpipes by Stuart Liddell, courtesy of McCallum Bagpipes.

The Champion may be invited to perform at WINTER STORM – The Pipes & Drums Concert.

McCallum Bagpipes has grown in a short period of time into one of the world’s leading bagpipemakers. Founded in 1998, McCallum employs 25 craftsmen who manufacture 40 sets of bagpipes every week, along with pipe chanters, practice chanters and smallpipes. McCallum is owned by well-known pipers Kenny MacLeod and Stuart McCallum.

The entry fee for the U.S. Silver Medal Piobaireachd is $60. The competition is open to the first twenty-five eligible applicants.